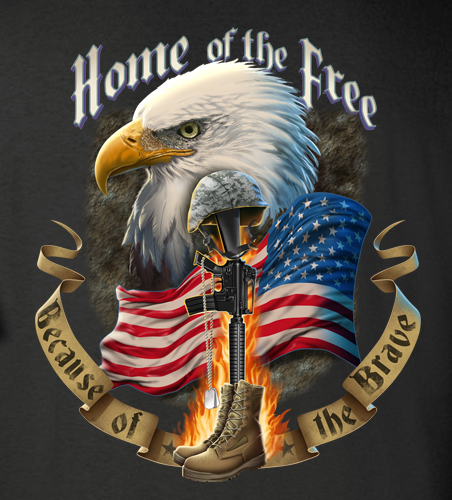 “What can I do to help make the world a better place?”

It’s a question each of us asks at some point in our lives. Veteran’s Day, however, is a day to honor those who, instead of musing, got off their butts and DID SOMETHING ABOUT IT.

It was August 1992. I was recently divorced and looking for a job. As I sat outside our local Job Service, I was approached by a handsome man in uniform.
“What do you want right now?” He asked with a smile.
“Right now? A job for starters. My Driver License (at 25 years old I still didn’t have one) so I don’t have to sit here waiting for a ride, and a whole new start.”
“We can give you all of that.” He stated confidently.
“No”, said I, “I’m 4F. I have Cerebral Palsy.”
“Are you sure that disqualifies you?” he asked, flipping through some papers on his clipboard. I was sure. But before I could answer, he must have found what he was looking for in those papers, because he said “Good day, Ma’am” and walked away as if we weren’t having a conversation.

My dad was in the Marine Corps for 4 years. He is the most honorable man I know. He set the bar high in regards to the way that a military person should behave, in my view. While the recruiter wasn’t technically “rude”, he could have at least acknowledged why he was leaving. Sheesh!

Our beautiful daughter, beginning high school, informed us that she was joining NJROTC (Navy Junior Reserve Officer’s Training). After two weeks (Okay, maybe not that soon, but soon!), she was determined to join the navy as soon as she graduated.

She loved her Senior Chief. She learned how to shoot a rifle. She learned how to put a bun in her hair to meet Military standards. She ironed her uniform, polished her shoes and perfectly placed her ribbons on her blouse. She was serious about this.

As a mother, I promised my children from the time they were small that their father and I would support any decision they made. After high school, our daughter put that to the test.

Shortly after her senior year began, she was invited to work out with the Marine Recruiters. Every Saturday, rain (or snow) or shine, she went to the recruiting station to participate in Physical Training with the recruiters and other people about her age who were considering enlistment (or just wanted a brutal workout). She so enjoyed the challenge that, in December of that year, she asked her dad and me to sign her Marine Corps enlistment papers. Hubby and I discussed. Knowing our daughter, we had two options:
1) Live up to our word to support whatever she decided or
2) Refuse and she would sign her own papers 6 months later, resenting us for not believing in her. We, of course, chose the first.

The recruiter, in his kind-but-pull-no-punches style, informed us what our daughter would be in for if we chose to sign for her. He scared me. I kept looking at my “little” girl, who was grinning from ear to ear, and thinking “can she do this?” I raised my children to know that they could do anything they set their minds to. Would she really be willing to commit to this for four years? She assured us that this is what she wanted. I could see the determination in her entire being. We signed. She swore in. Now to graduate high school…

My father, our daughter and her husband are each veterans of the United States Marine Corps. I could not be a prouder daughter/mother/mother in-law.

So, although I was unable to serve, my heart is always with those who do. And their mothers. I know what it’s like to watch a movie where two Marines walk to someone’s door and to cry uncontrollably, praying they never come to mine. I know what it’s like  to pray for strangers every day. To yearn for a time when Military services are no longer required. To grieve with every family who loses a servicemember, no matter the branch or rank. To cheer every American who is brave and able enough to heed the call.

“Thank you for your service” will never be enough. Thank you for signing a blank check, that never expires, for an amount up to, and including, your very life.  Thank you for representing a country that I am proud of more often than not. Thank you for protecting my right to say so, either way. Thank you for fighting the injustices, for helping those in need, for all that you do, and all that you are. I am a proud mother/daughter/relative/friend, and you are all in my prayers. God bless and keep you safe on this Veteran’s Day and always.

This is a text widget. The Text Widget allows you to add text or HTML to your sidebar. You can use a text widget to display text, links, images, HTML, or a combination of these. Edit them in the Widget section of the Customizer.
%d bloggers like this: